Book Review: One Boy, No Water by Lehua Parker 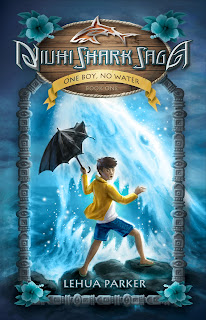 A boy who is allergic to water. Add to that the location: . Mix in the tantalizing legend of Niuhi, a shark that can turn into a person, and you have the perfect setting for a great mystery. Written in both English and Hawaiian Pidgin, One Boy No Water by Lehua Parker plunges the reader into a where reality and mythology blend seamlessly.

Abandoned on the ocean reef when he was a newborn baby, Zader is found by Uncle Kahana who carries the infant to the home of his niece, Liz, to be raised as one of her three children. Though treated by his adoptive mother as family, Zader can’t escape the fact that he is different. After all, who wouldn’t when the slightest touch of water acts like lava on the skin, bringing on an onslaught of sores and blisters of intense agony?

Strangely, the very allergy afflicting Zader is what leads Uncle Kahana to believe that he and Zader are, in fact, related. Yet, Uncle Kahana won’t give any details as to why or how this can be? Or where Zader’s birthparents are. Then Zader starts to have dreams: first of someone he calls Dreamgirl, then of a beautiful lady, and a man named Kalei whom Zader fears. Yet these aren’t dreams, as we soon find out. These people actually exist. Uncle Kahana knows them. What is their connection to Zader, especially when so much hints at their being Niuhi?

Parker does an amazing job of weaving the mystery of who and what Zader is throughout the story. Even more outstanding is her ability to infuse other mythologies into the action, which only serve to heighten the secrecy surrounding Zader. The truth will boggle the mind.

One Boy No Water, to be released by Jolly Fish Press on September 29th, is the first book of the Niuhi Shark Saga, and will be available in bookstores and in e-book formats.

Lehua Parker is originally from and a graduate of The and . So far she has been a live television director, a school teacher, a courseware manager, an instructional designer, a sports coach, a theater critic, a SCUBA instructor, a poet, a web designer, a mother, and a wife. Her debut novel, One Boy, No Water is the first book in her MG/YA series the Niuhi Shark Saga. She currently lives in with her husband, two children, four cats, two dogs, six horses, and assorted chickens. During the snowy winters she dreams about the beach.
Posted by Unknown at 3:52 am