Enter Here Those Who Wish To Be Scared


Scary, witty, funny, chilling, Pitch Green, the first instalment in the Dimensions in Death series by the Brothers Washburn, will keep you on the edge of your seats. Before I introduce you to Berk and Andy, here is a hint of what their book is about. 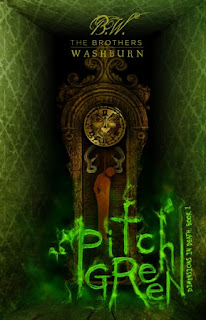 Trona is a small, smoggy, mostly insignificant town in . Besides
a booming chemical plant, the only thing that characterizes this dismal
town is dirt, sagebrush, and an enormous abandoned mansion.
The mansion is, admittedly, the only notable addition to Trona, but
it’s something everyone tries to avoid due to its creepy facade.
Everyone except for Camm Smith, who is obsessed with the need to get
inside.
Seven years earlier, as Camm herded a pack of little trick-or-treaters
past the mansion, her young neighbor, Hugh, disappeared,
becoming just one of many children who have vanished from Trona over
the years without a trace. Now a senior in high school, Camm is still
haunted by the old tragedy and is sure the answer to the mysterious
disappearances lies hidden somewhere in the decaying mansion.
Joining forces with her best friend, Cal, who also happens to be Hugh’s
older brother, Camm naively begins a perilous search for the truth.
As things spiral quickly out of control, and others die, Camm and
discover it will take all their combined ingenuity to stay alive. An
unseen creature, lurking deep within the bowels of the mansion, seems
to have supernatural powers and is now hunting them. Making matters
worse, they become entangled with hostile federal agents, who care
only about keeping old secrets permanently hidden. Left with only their
wit and seemingly ineffective firearms, they know they are running out of
time. Unless they can make sense out of the few pieces of the puzzle
they manage to unearth, the monster will certainly destroy them, and
like so many others before them, they will be gone without a trace.

(1)  Welcome Berk and Andy. What is it like working together? Who gets to decide what stays or what goes? In other words, which one of you is the Head Honcho?

B&A: We each have a different Head Honcho—the woman that each is married to. The Brothers Washburn is a non-competitive arrangement, and if a tie-breaking vote is needed, our wives are always happy to straighten us out (and have been very active in the business). As two of nine brothers, we have always respected each other’s talents and abilities, and now as adults, we find that it is great working together. When there are multiple ways to handle a given issue, we can find at least one way that will work for us both. We decide together what stays and what goes, and it is not unusual for us to come up with a joint solution that is better than was either of our separate solutions. We both have experience and expertise in different areas that gives us a wider range of wisdom that we can share in the writing process. Because of our sincere mutual respect, we have been able to put our egos aside, (which says a lot for two old attorneys) and come to mutual agreements as to the final versions of our books.

(2) You are able to put aside your egos? Now that is very impressive. And your wives decide the tiebreak? Even more impressive. You both look like such nice, kind-hearted brothers. Where did the idea for such a scary story as Pitch Green come from?

B&A: We hope we are nice, although there may be people with differing opinions. We always liked scary stories; reading them, watching them on TV, and especially telling them. As youth, we read many kinds of mystery and horror, including several different volumes of books published by Alfred Hitchcock, with titles like "Stories My Mother Never Told Me". We love those kind of scary stories, and in fact, our mother did tell some of the best scary stories. Pitch Green comes from a favorite "campfire" story that has been in our family for years and years. It was one of our favorites, and we think it has provided an excellent framework for a YA mystery, horror series.

(3)  I’ve read your book and agree completely. Tell me, what was it like growing up in the , which is the backdrop for Pitch Green and for the whole Dimensions in Death series?

B&A: We thought we were growing up in the perfect place to grow up with unlimited access to motorcycles, dune buggies, rifles and pistols. We loved it. As kids, we couldn't understand how anyone would want to grow up anywhere else. We loved the freedom that living in the deep desert allows, including the opportunities for unrestricted exploring and roaming. It wasn't until we returned as adults that it occurred to us that the place where we had grown up was quite remote, isolated, desolate and foreboding--the perfect place for this kind of story.

(4) Is there anything in particular from your childhood that inspired the concept for your book?

B&A: Telling scary stories was a much-loved family pastime. As mentioned above, the outline and basis of the book comes from a late-night story we told during our childhood. We told it on scout outings, on school and family trips and on other special occasions to classmates, family, friends and girlfriends. It was always a big hit, and proved to have the makings of a whole book in it.

(5)  I would love to ask the scary Guardian of the Mansion a question. Here it is: If it could have one wish, what would it be?

B&A: We think it wants to be in total control of its life; to be free to come and go from earth at will; to seek prey under cover of every moonless night; and it really wants to kill and eat the main character, our heroine, Camm, whom it hates with every fiber of its rotting green being.

(6)  What is your book rated, especially in terms of the ‘scaring’ factor?

B&A: There is no sex; little, and only minor, profanity; and there is no gratuitous blood and gore. We rely on suspense to scare more than anything. Having said that, it is a book that could keep a child up at night. We would call it PG-13.

(7) What do you do for fun, when you aren’t thinking up story ideas?

B&A: The ‘funnest’ thing we do right now is write, but we also enjoy books and movies.
Andy likes to go to , buy lots and lots of huge fireworks and set them off there (in ). He also likes to go out in the deep desert and make big bonfires. And, he likes camping and hiking.
Berk likes fast cars, dune buggies and magnum rifles and pistols.

(8) Is there anything else you would like to tell your readers?

B&A: We think the next book will be even scarier. 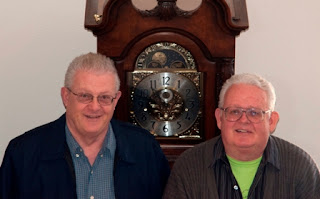 Here is how to connect with the Brothers Washburn:

Pitch Green was released on March 16th and is available where all books are sold.