The Evolution of Wings


As some of you might know, I was in Trinidad from July 20th – August 11th launching and promoting my MG fantasy, Up In The Air. My initial thought was to do one or two readings in bookstores and then sit back and enjoy the sun.

However, my sister-in-law, Anne, suggested that I should arrange readings in libraries. It was a brilliant idea, although I have to admit I was somewhat nervous at the prospect of speaking in front of so many kids. Yet, it's what a children's author is supposed to do, right?

So, I made the arrangements. Then Anne popped the question. "What activities do you have in mind for the kids?"

Luckily I have a twelve-year old daughter who likes to remind me that she knows more about kids than I do, because she’s a kid.

Of course! Given the nature and scope of Up In The Air, what better activity could there possibly be?

Yet, my first thought was, how?

And with an excited grin, my daughter said, “Trust me.”

After a trip to the dollar store, she set to work and made the prototype. I liked it. I figured it would be perfect for the six library readings I had arranged to do in Trinidad.
So, armed with feathers, tape, stickers and popsicle sticks (to represent the fliers), and accompanied by my daughter, one of my many nieces and Anne (who all agreed to help with the wing making), I made my first stop at the Chaguanas National Library. We quickly found out that using scotch tape to attach feathers to a popsicle stick was a bit tricky, but the kids used their ingenuity and made it work. Unfortunately I did not bring my camera with me for that first reading, but, here is a glimpse of the prototype. 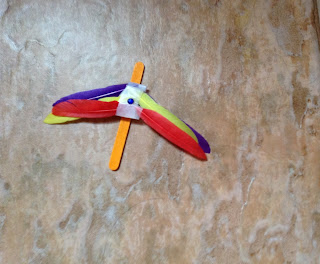 “Plasticine,” Anne suggested afterwards, which is actually in the same family as ‘plato’.

The idea was to surround a portion of the popsicle stick with the plasticine and stick the feathers onto it. However, the children at the Tunapuna National Library had grander ideas. The popsicle stick people came alive! 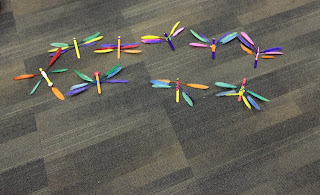 Not only was my daughter’s original wing making concept metamorphosing, but I also noticed something else.  My nervousness at how to interact with and engage children was lessening. I felt more comfortable and relaxed. I was able to establish a rapport with them. Even more exciting, I was starting to thoroughly enjoy myself.

AND, by now I had an entourage of helpers: Three nieces, my daughter and one of my brothers, Gerard.

The next reading was the following week, and in the days leading up to it, we added another ‘tool’ to our wing-making. 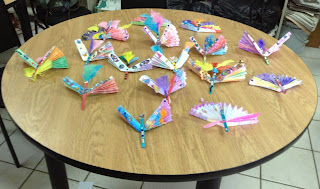 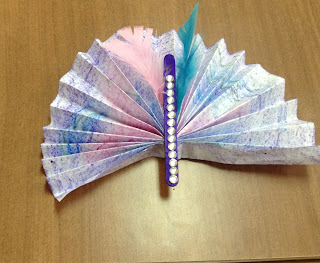 This pair of wings was made by a budding young artist.

Not to be outdone, the kids at the Arima and San Juan National Libraries chipped in with their version of wings. 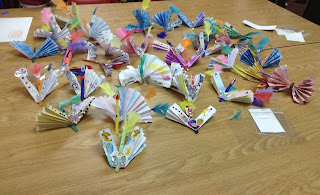 By the time I did my sixth and final library reading, I was exhausted yet enervated.

I discovered that I really enjoyed interacting with children. I particularly loved their questions and their feedback to the first chapter I read to them of Up In The Air. Their enthusiasm was uplifting and, thanks to them, I now look forward with confidence and excitement to reading in schools.

Here are the final set of wings from the amazing kids at St. James library. 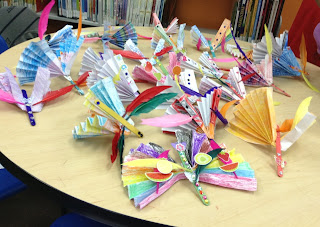 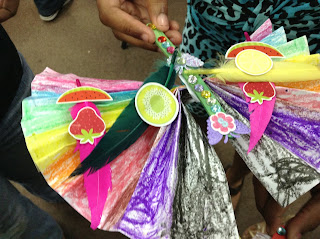 I could not have done this without the help of the various members of my family who came with me to the various libraries. In particular, I want to thank my daughter for coming up with the idea in the first place and for accompanying me to all the library readings.