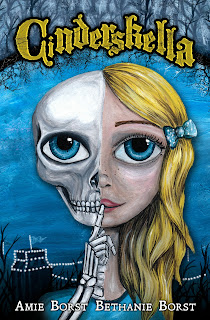 Cindy is just a normal 11¾-year-old girl. At least until she wakes up one night and finds out she’s dead. Well, she isn't technically dead—she just doesn't have any hair . . . or a nose . . . or skin. Yep—all bones, no body.
Human by day and skeleton by night, Cindy is definitely cursed. And because her mother recently died, Cindy has no one to turn to except a father who is now scared of her and an evil stepmother who makes her do the housecleaning with a toothbrush. To make matters worse, the Spring Fling dance is approaching, and Ethan, the cutest boy in sixth grade, doesn’t seem to know Cindy exists. Of course, Cindy doesn’t think letting Ethan find out she’s part skeleton is the best way to introduce herself.
While facing such perils as pickled pig's feet, a wacky fortune teller, and a few quick trips to the Underworld, Cindy is determined to break the curse -- for for a single night.
Cinderskella is available for purchase at Barnes & Noble 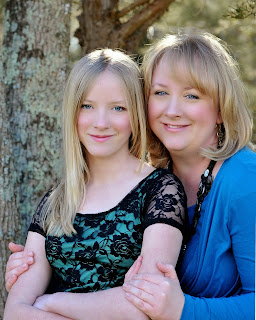 Amie and Bethanie Borst are a mother-daughter writing team. Amie believes in Unicorns, uses glitter whenever the opportunity arises, accessories in pink and eats too much chocolate.  Bethanie is a spunky 13 year old middle-schooler who loves archery, long bike rides and studying edible plant-life. Cinderskella is their first book together and is part of the Scarily Ever Laughter series. You can find them on Facebook (www.facebook.com/AmieAndBethanieBorst), Twitter (www.twitter.com/AmieBorst), Pinterest (www.pinterest.com/AmieBorst), From the Mixed-Up Files of Middle-Grade Authors (www.fromthemixedupfiles.com) and blog (www.amieborst.com)

GIVEAWAY –
Amie Borst is celebrating her book release and cover reveal with a monthly giveaway in The Great Cinderskella Giveaway! If you’d like to win a $25 Amazon gift card, just fill out the Rafflecopter form below. You’ll be automatically entered into the grand prize drawing for a Kindle Fire in October!