The Terrors of Being a Multi-Genre Author

Johnny Worthen is one of the funniest guys I know. His blog post interviews will crack you up. His open support and loving heart will make you want to get to know him. So, imagine my surprise and initial horror when I sat down to read his debut novel, Beatrysel.

This is a book that delves into the occult, for crying out loud!. As I’m reading it, not only do I keep looking over my shoulders, but I keep thinking, ‘how could such a sweet, jolly fellow like Johnny write something like this?

Well, I had to find out, so I asked him to tell me so I could share it with you. And here is why. Beatrysel is an amazingly well-written, page-turning sort of book, the kind you can easily envision as a movie, watching the big screen while you cringe with horror and anticipation.

Before Johnny explains this duality in his make-up, here’s a bit about the book. 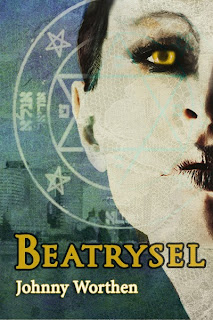 Unsatisfied with the ancient grimoires, the Magus
made his own. Unsatisfied with the ancient demons,
the Magus made Beatrysel. She was a creature of
love, but there is no love without hate, no light
without darkness, no loyalty without betrayal.
And demons covet flesh.
Johnny Worthen's novel BEATRYSEL is a modern
Faust tale set in the American Northwest where the
cold winter rain melts the barriers between what is
real and what is more real.
Beatrysel is a terrifying journey through modern
metaphysics, High Magic and ancient religions,
where secret dreams turn to nightmares, when Will
becomes Form. Power-hungry magicians, serial
killers and scorned lovers must contend with the
power of the most beautiful and dangerous Magick
in creation-- for Beatrysel is a creature of love.

Now that you see what I mean, here’s Johnny!

JW: Love being here with you, Ann Marie. So I’ve summarized your question to me into a tighter, more gripping title. Hope you don’t mind too much.

JW: It wouldn’t make any difference.

I write what I want to read:
The terrors of being a multi-genre author

Most people know me online by my blogs and humor. Those who know me personally would probably also characterize me as a class clown. And yet, here I am, author of one of the greatest thriller books of occult horror ever imagined - BEATRYSEL. I hear Stephen King has made an altar to me in his living room and lights incense to my effigy. Sad, but I’m just going to have to bear that. But to the question.

What about the incongruity of my boisterous self and my debut BEATRYSEL, dark and menacing?

The obvious answer is that I’m multi-dimensional. Like I tell the wife when I do something inexplicable, “Don’t try to understand me. I’m just too complex.” She nods and rolls her eyes while I remove the cat from the oven. This is the answer, but it poses another question, or in my case, a problem.

We’re all complex entities. We all laugh one day and cry the next. We are people. The problem comes once we start putting ourselves out there, selling our souls on the pages of books, or otherwise seeking fame. Here it becomes a problem to say one thing and show another. It’s a matter of audience identification and one I’m going to struggle with for my entire career.

Class clown that I am, I have written a comedy. It’s a wonderful mystery staring Tony Flaner, slacker, sarcastic, stand-up comic. The Finger Trap is his debut. It’s great and I sold the hell out of it for years before it got picked up. Yep, it’s found a home at Jolly Fish Press. But not until 2015 at the earliest.

Before that comes out, I have a Young Adult Paranormal trilogy on the blocks. It’s wonderful and sentimental, full of angst and courage. It’s coming out in Spring of 2014, also from Jolly Fish Press and it’s called Eleanor, The Unseen. It’s fantastic. I recommend it. Really you’ll love it.

But first, before the funny side of me finds print, or the tender side of me sees pages, we have the dark side of me on display. BEATRYSEL.

Thus it is. It’s how I write. It’s what I write. I’m a multi-genre author and I’m going to be a publicist’s nightmare if I’m not already. I jump from paranormal to slapstick. Magick to Hindu cults, to Native American legends and back to politics, because, you know, why not?

My motto is “I write what I want to read,” which is a cheap way of saying “I do what I want.” The story forms, I follow. I ignore boundaries and genre definitions. I keep the sex down and call it a YA, but it could be thriller, mystery, occult, literary fiction in certain enlightened corners of tolerance. The comedy could be a thriller; the horror, a love story. I’m all over the place. They’re all just labels, but these labels will define me and my career and I’m worried about them.

I wrote BEATRYSEL because I was haunted by images of love and reconciling myself with its shadows. Having some knowledge of modern occult philosophy, a hobby of mine, I could not find any literature where the forms and practices of that vein of philosophy were accurately depicted, let alone used. The rest just fell into place.

And thus was made BEATRYSEL.

Once that was out of my system, I wrote comedies and coming of age stories, trilogies and series. I have a hard-core western on the simmer, which is so out of my wheelhouse, I’ve finally considered using a pen name for that and don’t get me started on erotica. (Sorry for that mental image).

People are complex and writers use their art to explore themselves. If I was only haunted by demons, that would be all I’d write. But like you, I am vexed by family and childhood trauma, inequality, anger, love and hate. Hope and ambition, silliness and absurdity, money, purpose and folly. It’s who I am.

But don’t let that scare you. Let BEATRYSEL do that. 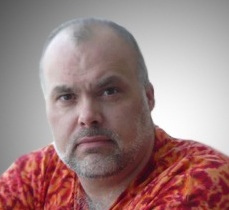 Johnny Worthen is a lifetime student of the occult.
Raised in a secluded suburb of Salt Lake City, he
gravitated to the more obscure paths of spiritual
knowledge. He is a Freemason, twice Past Master of
his Lodge, youngest ever at the time.
From the University of Utah Johnny received
degrees in English and Classics with a Master’s
Degree in American Studies. He married his juniorprom
date and together they have two sons.
After many varied and interesting careers, Johnny
writes full time now. He is the author of a popular
blog, The Blog Mansion. Besides BEATRYSEL,
Johnny has four other novel are under contract for
publication in 2014 and beyond.