What Do A Skeleton and Cinderella Have In Common?

There are so many stories and movies about Cinderella. Some hold true or ‘sort of’ true to the original, yet some take off in directions no one could possibly have perceived.
I can truly say that Cinderskella by Amie Borst and her thirteen-year old daughter, Bethanie, is among the latter. 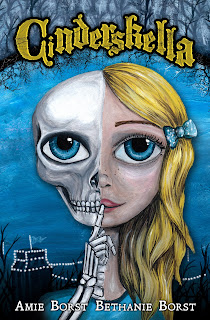 Cindy is just a normal eleven and three-quarter year-old. At least until she wakes up one night and finds out she’s dead. Well, she isn't technically dead—she just doesn't have any hair . . . or a nose . . . or skin. Yep—all bones, no body.
Human by day and skeleton by night, Cindy is definitely cursed. And because her mother recently died, Cindy has no one to turn to except a father who’s now scared of her and an evil stepmother who makes her do the housecleaning with a toothbrush. To make matters worse, the Spring Fling dance is approaching, and Ethan, the cutest boy in sixth grade, doesn’t seem to know Cindy exists. Of course, Cindy doesn’t think letting Ethan find out she’s part skeleton is the best way to introduce herself.
While facing such perils as pickled pig’s feet, a wacky fortune teller, and a few quick trips to the Underworld, Cindy’s determined to break the curse—even for a single night.


I was intrigued by the story line and decided to ask Amie to explain to me, and you, how the idea for Cinderskella came about. Here is what she had to say.

AB:  Thanks for having me, Ann Marie. I am very excited to be here and share with you the history behind my book. So here goes.

I suppose when it comes right down to it, you could say my daughter and co-author, Bethanie, was my inspiration for Cinderskella. She’d tell it a little differently and say it was the school librarian. But let me go back a bit, first.
It was early 2010 and I had finished writing my very first book - a YA paranormal romance.  I’d spent some time querying it and sending loads of requests off to agents. Unfortunately those partial and full manuscript requests weren’t panning out too well and I’d become a bit deflated.
One afternoon Bethanie (who at the time was only nine, she wouldn’t be ten for a few more months) came home from school with some crudely cut up sheets of paper which she’d stapled together at a seam.
“Today was the worst day of school. Ever,” she said as she slammed her makeshift booklet on the counter.
As any normal parent would respond, I soothed her and asked, “Why?”
“Because my librarian is boring. She made us listen to stupid, girly, princessey Cinderella stories the whole time!”
(Let me now add that Bethanie has always been skilled at the art of being blunt.)
(Bethanie has also never been a stupid, girly, princessey girl. Not that princessey girls are stupid – I happen to have two of them in my home.)
“Well, I can understand why you might be bored with that,” I told her. “Were you able to find a way to try to make the most of it?”
Bethanie picked up her stapled-together booklet, waving it in my face. “Yeah. I wrote my OWN story.”
“Can I see?”  I took the booklet from her and saw sketched-out letters across the top which read CINDERSKELLA. Beneath the title was the drawing of a coffin with a skeleton inside.  The blooming author within me was compelled. I opened the booklet to find a few paragraphs she’d written. It was the start of a story. My heart fluttering, excitement building, I saw her genius unfold before my very eyes. She’d managed to weave Cinderella into a spooky tale of a skeleton girl. (The humor came later.)
I couldn’t contain my excitement any longer. “Bethanie, this is incredible.  I think you’ve got something here!”
Her eyes lit.  “I do?”
“Yes, you do.”
And that, you could say, was the start of a very beautiful mother-daughter relationship, where we chose to pursue the writing of this book together.  Bethanie was my inspiration. I suppose the librarian was, in fact, hers. 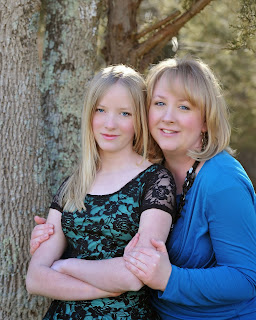 Amie Borst still believes in unicorns, uses glitter whenever possible and accessorizes in pink. She enjoys eating chocolate while writing and keeps a well-stocked stash hidden away from her family. A native New Yorker she currently resides in Northern Virginia with her husband, three children and a cute dog named Lily. She wishes she had a hot-pink elevator with carnival lights to travel the world. But for now, her minivan will have to do.
Bethanie Borst is a spunky 13-year-old who is an avid archer with Olympic dreams, enjoys the outdoors, loves reading and is quick to make lasting friendships. When she is not writing, she swings on a star.

To celebrate the launch of Cinderskella, Amie and Bethanie are giving away a copy of their book to a lucky winner. Enter below to win!!

Here is where you can purchase Cinderskella:
Amazon
Barnes & Noble
Books-A-Million

Add it to your to-read shelf on Goodreads!