“Quirky, fun and surprising”. That’s how Cathrine Garnell describes her middle grade books for children. And when you read what they are about, you’ll see why. 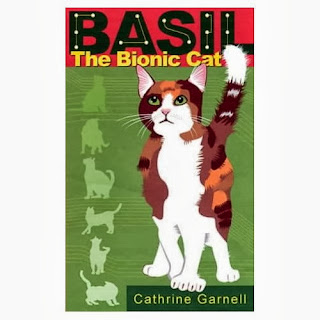 Basil the Bionic Cat is a cross between Inspector Gadget and James Bond with a cat as the hero.

However, when a rival scientist becomes involved with an Eastern European Mafia gang in an attempt to steal Mr P.’s latest inventions, the rest of the Pilkington family are put at risk.

Both the Secret Service and Mr P. are on the trail of the Russian spies, but it is down to Basil and his new found sensory powers to track down the villains’ hideout and help rescue the twins from an unknown fate. 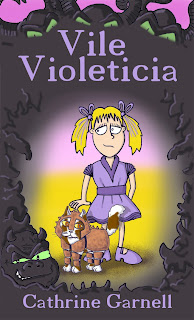 Violeticia s a particularly naughty little girl. She has a total disregard for authority and blatantly flouts the rules by refusing to learn life's simple lessons.

Then one day, payback comes with a twist ~ Dreamtime Reality. A bump on the head sends Violeticia to a place she never knew existed and one where she definitely doesn't want to be ~ the wretched Isle of Phantas Magorias.

Here the nightmares and monsters are real, and there’s only one way out: learn to be good or else. The clock is ticking, time is running out and not just for Violeticia.

Violeticia has choices to make, but will they be the right ones? 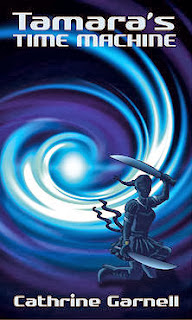 Meet Tamara Merrick. One day she’s just an ordinary teenager. The next, her world is turned upside down as she discovers she is the world’s only teenage Time Traveller, and to make matters even worse, the entire fate of the world now rests in her hands.

Meet Seymour Froggitt. Dealer in Fine Art and Rare Antiquities, whose sole ambition is to become the world’s first Inter-Dimensional Traveller after discovering the legendary Book of the Gods, revealing the lost secrets of the Arkrashian Empire.

Meet Fluke Spawn. Seymour’s partner in crime and unwitting accomplice, assisting in the search for several special artifacts hidden across time, known as the Gifts of the Gods.

Little do they know that bringing these artifacts together will result in a CATACLYSMIC TIME CATASTROPHE!


The race is on as Tamara’s adventures take her to the very dawn of time, to Ancient Egypt, the Temple of Ta Prohm in Cambodia, the Patagonian Ice Fields, the Druids at Stonehenge and to the Mystical Red Rock, Uluru, in her perilous quest to save the world as we know it.

CG:  Thanks for having me today, Ann Marie.

AMM:  Your books do sound quirky and fun! Have you always wanted to write for children?

CG: No, I just used to write humorous anecdotes and short stories.  At that point I had never considered writing a ‘proper’ novel and then one day the idea for Basil the Bionic Cat just ambushed me and took over. It was a total surprise to have an entire plot just sitting there waiting to be written and basically I’ve been busy ever since.  I have also co-authored 3 adult books too, so I don’t think I’m ever going to stay firmly fixed in the children’s genre, plus I got a really fabulous idea for a Young Adult novel just the other day, so who knows what genre I might write in the future.

AMM: So you are in essence a multi-genre author! Was there any one thing or one person who influenced your writing the most. How?

CG:  I can’t think of anyone or anything that actually influenced me to write.  It was just something that I did/do.  Being shy as a child, I suppose it was a way to create a place for just me, a creator of my own worlds without the fear of the real world invading my space.  I write because I love it, it’s as simple as that.  I enjoy the freedom and endless possibilities that exist when I’m staring at a blank sheet of paper. I just close my eyes and imagine that nothing is impossible, and on paper, it’s not.

AMM:  Where do you get your ideas from?

CG:  My ideas just pop up, sometimes at the most inappropriate times, i.e.: the middle of the night or while sitting in a meeting when I should be paying attention, but a rogue thought has other ideas and leads my mind astray!   I can be inspired by anything from a single word uttered in a passing conversation to a visually stunning landscape/cityscape/seascape.  The way clouds morph overhead as the rays of the sun sculpt them into something new. Fog rolling and curling deceptively over the road as you drive home from work on a dark wintery night, that’s always highly inspiring.  My cats going through their daily routines are another one especially for the Bionic Basil novels, there are just so many things to take from the outside world, it can sometimes be overwhelming and I can’t carry that many notepads with me – thank heavens for Siri and a camera.

AMM: I agree!!! Do you prefer to write at home, alone, or in a coffee shop or other public place, surrounded by people and lots of noise?

CG:  I’m a home alone writer, I like solitude, total quiet; anything else is a complete distraction for me. My ideal scenario, as I’m sure many other writers out there would agree, would be a fabulous log cabin with a covered porch next to an idyllic lake surrounded by nothing but forest.  I know it’s a total cliché but for me it would be heaven.

AMM: I’m the opposite at times. I can be in a busy, noisy Starbucks, but when I start writing everything fades to silence. The idea of a log cabin does have a great appeal though. J What do you do for fun; apart from writing, that is?

CG:  I design and make jewelry. I also paint, and at the moment I’m decorating my dolls house.  It was a gift a few years ago and has remained pretty much the same since I took delivery of it as I wasn’t sure how I wanted it to be. However, a couple of months ago inspiration struck like lightning and the decorating has commenced.  Who knew working in 1/12th scale could be so much fun and at the end of it I shall have a wonderful spooky/haunted Halloween dolls house.

AMM: Wow! And you’re multi-talented as well! So, if you could choose another career, what would it be?
CG:  A Secret Agent (I think I’ve read too many books) or a Museum Curator (but only if it was the one from the movie: Night at the Museum - that would be so much fun.)

AMM:  LOL. Tell us some fun facts about yourself?

CG:  I like to wear wigs. My own hair is very very long and I find it absolutely hilarious to put on a short wig as no one recognizes me. My own brother walked right by me one day and just kept going – it was so funny.

Halloween is my favourite holiday ever – cue evil laugh – muwahahahaha!
I like collecting crystals, the real ones – although I am partial to a bit of bling.
Collecting old books is something else I find fun, especially buying from auction houses.

AMM: Are you working on anything new right now and do you have any books coming out soon?

CG:  Yes and yes. I’m working on Ozwald Tuttle and the Ordinary Reality right now and then I’ll move onto Newton Hawk and the Elixir of Life.  My next release is called Kosmic K9 & BatCat ~ Quartermass and the Pigs which will be followed by Basil’s Balmy Adventure Book II in the Bionic Basil Series and after that, Agatha Crispie and the Sleuth Fairy. For more info about the actual publication dates - check my website for details: News

AMM:  And there you have it! As you saw, Cathrine's books are as fun and as surprising as the author herself!

I’ve always loved books and writing.  I wrote my first story at the tender age of four about a fluffy rabbit called Miff and no, it didn’t get published! (My mother still has the original text somewhere).  However, I have been writing seriously for the last decade or so.  Basil the Bionic Cat was my first published novel in 2004.  Since then I have been busy writing several different series, including Tamara’s Time Machine, Kosmic K9 and BatCat, and Vile Violeticia, with lots more on the way. Check my website for more titles coming soon.


And you can find Cathrine’s books here: