How 'Up In The Air' Came To Be

“How did you come up with the idea for Up In The Air?” People, especially children, ask me this question all the time.

The thing is, the idea came at the oddest of moments; while I was meditating.

I don’t know about you, but when I meditate my mind is filled with ‘stuff’. It’s hard to obtain silence, especially when I first started years ago.

However, on a particular day in 2003, something quite amazing happened when I sat down to meditate. From out of the clutter of my thoughts, I saw wisps of color, then vague shapes, which soon solidified into vivid images speeding through my mind like a trailer in fast forward:  a girl, unhappy, longing to fly, trying to escape her family life, landing in the magical world of Chimeroan and getting wings… 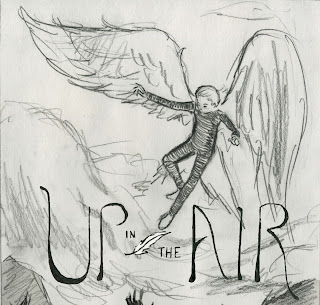 To say I was excited would be an understatement. As I sat there for those few seconds, I knew this was something huge. You see, in those days, I never saw color when my eyes were closed. Ideas for stories came to me in words. I would get a sense of the story, which became clearer and more specific as I wrote.

This was something way out of my league.

In my excitement, I jumped up, ran to my computer and started typing. I was on a roll.

Chapter 2 came fast on its heels.

I had no clue what came next.  Worse, I had this awful feeling that if I hadn’t preempted the meditation I would have gotten the full story. So I closed my eyes, tried to still my mind…..   and was bombarded with every possible thought but the ones I was looking.

So I went back to basics. I asked questions.

Imagine a place where your deepest dreams came true. The possibilities are endless. Of course… there is a price.

Yet one thing held me back, and I didn’t realize this until months later. I had believed that since the idea came to me in such a unique, ‘out-of-this-world’ way, I had to stick to the format. I felt I ought to begin the story exactly as I had ‘seen’ it, follow the sequence of events and remain true to the images I had received.

Why indeed? The more I dwelled on this question, the more I realized that I was under no obligation to stick to anything. After all, I’m a writer. I create the story.

I was given an idea; an amazing concept, and I was free to do with it as I wished. That was when Up In The Air really started to fly, so to speak. I had to trust myself. And I did. I kept the essence of the images I saw and wrote the book.

I will always be grateful for those flashes of inspiration I received years ago. But even more importantly, I learned that life abounds with opportunities and it is up to us to be open enough to receive these 'gifts' and then shape them in a way that is true to us.