I'm so excited to share with you the link to my new home.  www.annmariemeyers.com

Posted by Unknown at 7:03 am No comments:

Since the launch of MALAIKA’S COSTUME, a picture book by Nadia Hohn, I’ve been amazed at the energy Nadia has put into her presentations. Not only does this amazing author talk to the kids with passion and excitement, but she dons her costume and dances with her audience. (Be sure to check out the video below). 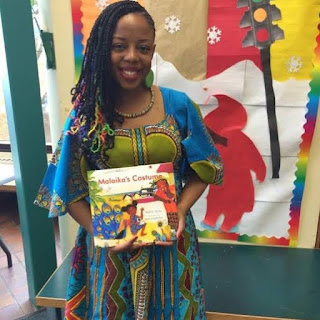 It’s Carnival time. The first Carnival since Malaika’s mother moved away to find a good job and provide for Malaika and her grandmother. Her mother promised she would send money for a costume, but when the money doesn’t arrive, will Malaika still be able to dance in the parade?

AMM: So happy to have you here, Nadia. Where did you get the idea for MALAIKA’S COSTUME

NH: I used to write stories and make books as a child. The Greatest Carnival Ever is one of the few books I still have that I both wrote and illustrated for a project when I was in Grade 5.  A book that was featured on Reading Rainbow about Carnival in Montserrat also inspired me. I always loved the idea of a book culminating with a Carnival.

Years later in the winter of 2010, I took a writing course at George Brown College with author Ted Staunton.  He gave us a picture book assignment and this is when I wrote MALAIKA’S COSTUME.  I was so excited about the details of the story.  I have also played Mas’– which means I wore a costume and danced– in the Caribana parade, Toronto’s annual summer Caribbean Carnival, and loved the experience.

After MALAIKA’S COSTUME was published I started to read reviews of my book, and what readers often saw was the story of immigration and globalization.  Only then, did I realize how much I was influenced by what had occurred in generations of family— patterns of migration to the US, UK, Canada, Cuba, and Panama—in which members left Jamaica for work in order to send money back home to help “make a better life” for their family members.  This theme of immigration and separation is Malaika’s story and is part of my family history as it is for many other Caribbean people.  The story is also largely influenced by Trinidad’s Carnival tradition with all of its characters and by the backdrop of rural Jamaica, where my parents come from and which I have visited.

AMM: I’ve never before seen anyone put their heart and soul into presenting their book as you. What are you thinking as you’re dancing in front of the kids in the audience?

NH: Hmmm…. What am I thinking?  I am thinking that I truly am living my dream, which is teaching about African-Caribbean culture through music and the arts.  I am an elementary school teacher and am two courses away from getting my diploma in early childhood music.  The pedagogies (Orff, Kodaly, African, and my own teaching experience and research) that I have learned and teach are multi-genre/modal so music is taught through language, play, movement, storytelling, socio-emotional connection, and song.  These are all components to effective learning and contribute to a positive and safe learning environment.  I incorporate all of these into my book presentations.  I never wanted my teaching to be limited to a classroom, so I take that space with me whether it is at a festival, stage presentation, bookstore, or a school gymnasium.

AMM: Will there be sequels to MALAIKA’S COSTUME?

NH: Yes, the sequel will be out in fall 2017.  The working title is MALAIKA’S WINTER CARNIVAL. The French translation of Malaika’s Costume will be out in spring 2017.  I am working on a play adaptation and I feel another of Malaika’s stories in me.  It’s been sitting in my brain for a few months.  I think it’s time I commit it to paper.

AMM: What’s next for you? I hear travel to a faraway land in in the offing?

NH: I am currently researching biographies on two women as well as working on my middle grade manuscript and play adaptation.  I also have a young adult novel in the works.

I will be teaching early years music with some art in Abu Dhabi, UAE for about two years.  I am super excited.  I will be doing more travel writing.

Lots of writing, workshops, conferences, and possibly study, as usual.

NH: My deepest dream is to be the Jacqueline Woodson (author) for Canada, someone who helps to keep traditions, songs, and stories alive through my writing.  I would like to contribute and write about the African-diasporic experience whether it is in Canada, Jamaica, Brazil, or the rest of the world through my songs, stories, books, and work. 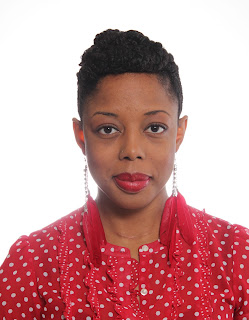 From the age of six, Nadia L Hohn began writing stories, drawing, and making books.  Nadia is the author of the Music and Media books in the Sankofa Series to be published by Rubicon Publishing in 2015.  She was awarded the Helen Issobel Sissons Canadian Children's Book Award for her  picture book manuscript , Malaika's Costume, in 2014.  In 2016, Malaika's Costume was published as a picture book by Groundwood Books and won the 2015-2016 ETFO Children's Literature Award. Nadia Hohn loves to write (songs, blogs, journals, stories), play piano, cook vegan dishes, travel, study arts and cultures of the African diaspora especially Caribbean folk music, Orff music education, and run.  Nadia is a public school teacher of French and the arts in Toronto. She is currently working on a middle grade novel and researching biographies.

Posted by Unknown at 4:41 am No comments: